(This was originally published by the NIJ last year, but was shared again recently, so the 2018 date references have been pushed back. What we know is this is still the direction that the NIJ is headed for new standards “coming soon.”)

This draft document specifies the threat levels and associated ammunition intended for use with voluntary National Institute of Justice (NIJ) Standards that specify a minimum performance requirement for equipment intended to protect U.S. law enforcement against handgun and rifle ammunition. It defines ballistic threats identified by U.S. law enforcement as representative of prevalent threats in the United States. Its primary purpose will be for use by the NIJ Compliance Testing Program (CTP) for testing and evaluation of ballistic-resistant body armor for certification by NIJ. It will be used by both ballistics laboratories that test body armor and body armor manufacturers participating in the NIJ CTP. This standard will be included in the Personal Body Armor scope of accreditation used by the National Voluntary Laboratory Accreditation Program (NVLAP) to accredit ballistics laboratories.

The final version of this document is anticipated to be published in late 2018 as a companion to NIJ Standard 0101.07, which will revise NIJ Standard 0101.06, Ballistic Resistance of Body Armor, published in 2008.1 This draft ballistic test threats document is incorporated by reference into the draft version of NIJ Standard 0101.07, which specifies minimum performance requirements and test methods for the ballistic resistance of body armor used by U.S. law enforcement that is intended to protect the torso against handgun and rifle ammunition. A standalone threats specification may also enable testing of a variety of ballistic-resistant equipment, not just ballistic-resistant body armor, against contemporary U.S. law enforcement threats.

Threat level nomenclature has been revised from NIJ Standard 0101.06 to be more descriptive of threats and to reduce confusion among law enforcement end users of body armor. Level II and level IIIA have been replaced with “HG1” and “HG2,” respectively, to represent handgun (HG) threats. Level III and level IV have been revised to three levels representing rifle (RF) threats— “RF1,” “RF2,” and “RF3”—with RF1 and RF3 replacing level III and level IV, respectively. RF2 is a new intermediate threat level introduced in this draft specification.

The attached document uses the following in accordance with international standards:

— “shall” indicates a requirement;

— “should” indicates a recommendation;

— “may” indicates a permission;

— “can” indicates a possibility or a capability.

THE DRAFT NIJ 0101.07 TABLES BELOW ARE DESCRIBED IN THE FULL DOCUMENT LINKED ABOVE. 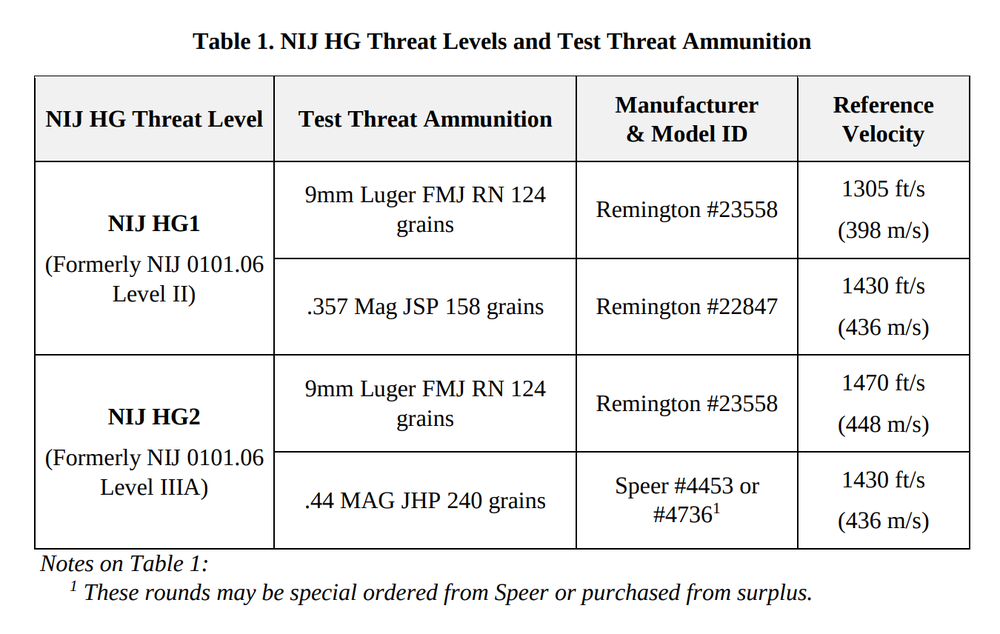 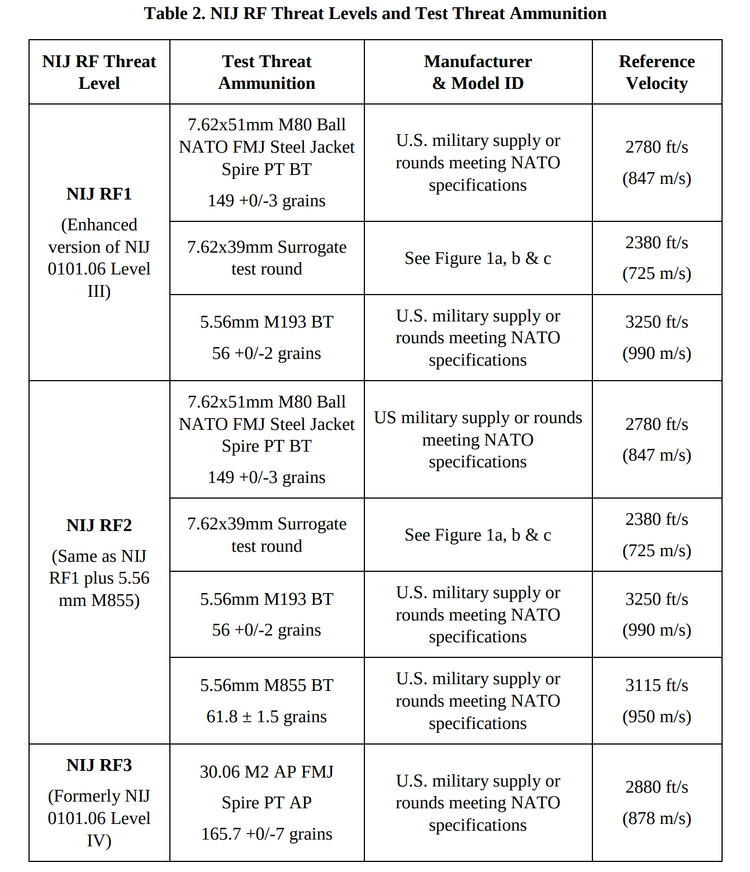 Please send all written comments on this draft document to Mark Greene, Policy and Standards Division Director, Office of Science and Technology, National Institute of Justice in electronic format by email at mark.greene2@usdoj.gov.

Nothing in the attached document is intended to create any legal or procedural rights enforceable against the United States. Moreover, nothing in this document creates any obligation for any individual or organization to follow or adopt this voluntary standard nor does it create any obligation for manufacturers, suppliers, law enforcement agencies, or others to follow or adopt voluntary NIJ equipment standards.